You could buy yourself a lottery ticket for your chance to win millions, or you could have fun in the process by playing some of the best progressives online. We detail some of the best jackpot games available on the Web, each accumulated thanks to a percentage of every player’s wager contributed to the total prize pool, and the best online sites to find them.

There are two types of progressives – local jackpots which are confined to the one casino with all players who play here contributing to the total prize pool, and larger network progressives which are connected by an array of online casinos. The latter are the pokies responsible for the biggest jackpots.

Since the jackpot is accumulating from players all over the world, the jackpots are huge and when a lucky player activates it they can win the seven or eight figure jackpot, and the pool resets again to offer player’s another chance at million dollar plus win.

Mega Fortune, by Net Entertainment, has one of the best reputations when it comes to big wins, predominantly due to the whopping €17.8 million jackpot won in 2013 – making it the biggest win online in the history of online progressives.

Based on a life of luxury, this 5 reel and 25 paylines progressive features three jackpots – Mega, Major and Rapid. The Mega offers the biggest jackpot and to win you need to activate the bonus and spin the ‘Wheel of Fortune’ type wheel. The minimum bet per spin to win the jackpot is the minimum bet of the game – $0.25 per spin – but you can play up to $50 per spin too if you want to reap the rewards of the pokie itself – which has free spins and a 5x multiplier.

The total prize pool is often in the millions, and therefore Mega Fortune is considered to be one of the best pokies with the biggest jackpots. 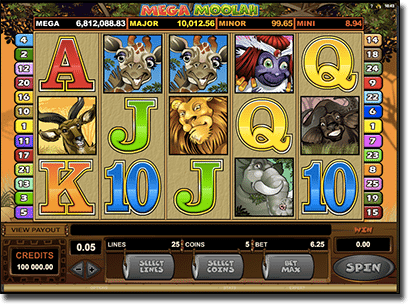 Created by Microgaming, Mega Moolah is considered to be on par with NetEnt’s Mega Fortune in terms of making player’s instant millionaires.

Mega Moolah is based on an African Safari and features 5 reels and 25 paylines, along with four jackpots including the Mega, Major, Minor, and Mini.

The Mega jackpot, featuring seven and sometimes eight figures, is what we are after here and you can win it via the bonus feature where you spin a wheel. If it lands on one of the jackpots (hopefully the Mega) you win.

You do need to be playing the maximum bet of $6.25 per spin to activate the bonus round, but to keep your account balance steady there are 15 free spins on offer by spinning three Scatter symbols. 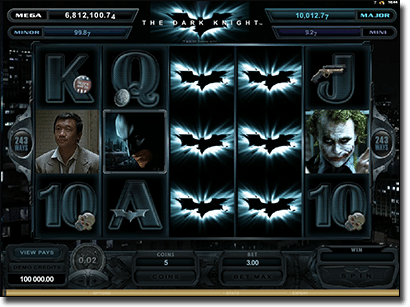 Microgaming have done the Batman film justice with this incredible progressive and it even gets up to the same figures we see on Mega Moolah. Based on the 2008 blockbuster, The Dark Knight features a unique format for a progressive – 243 ways to win across 5 reels.

There are four progressive jackpots on offer – the Mega, Major, Minor and Mini jackpots – with the Mega jackpot climbing into the millions. You need to activate the Wheel Spin Bonus, similar to Mega Moolah’s feature, to win and you can do so by playing a minimum of $0.30 per spin.

If you miss out there’s 15 free spins with a 2x multiplier, as well as incredible cinematic spins from the film – perfect for Batman fans.

The best part is the jackpot doesn’t adjust based on the currency. So if you win a million casino credits on the Dark Knight you will be paid one million in Australian Dollars, and same goes with other currencies such as Euros and Pounds. 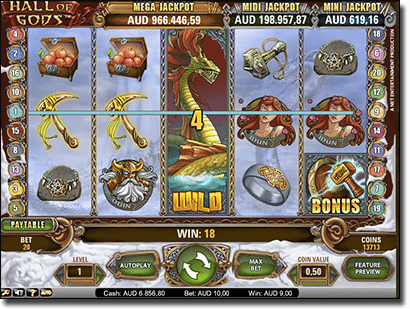 Hall of Gods is NetEnt’s mythological progressive and often has a huge jackpot on offer, as well as two smaller prize pools too.

This 5 reel and 20 payline pokie is based on Norse mythology and you can find the amount of the Mega, Midi, and Mini jackpots in the top right hand corner. To win the Mega jackpot you need to trigger the bonus game (spin at least three Bonus symbols) and from here use Thor’s hammer to smash open three matching jackpot symbols.

You need to have all 20 paylines activated, which can be done at a minimum of $0.20 per spin, and if you do manage to get three matching symbols you have the chance to win one of the three jackpots – including the huge Mega jackpot of up to seven figures. 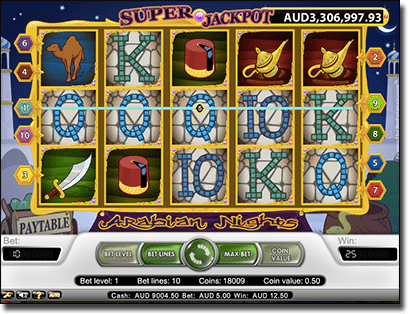 Arabian Nights isn’t as popular as Mega Fortune or Mega Moolah, but the NetEnt progressive often has a seven figure jackpot. With a hot desert night theme, we are reminded of Aladdin on this 5 reel and 10 payline pokie and while there is just one jackpot on offer all you have to do to win it is spin five Wild symbols.

You will receive a coin payout too if you only manage two, three, or four Wilds, but all wins are doubled. Additionally, you do need to bet the maximum bet to win the jackpot, which is $5 per spin.

Where to find progressive pokies

Now you know the best pokies to play for the biggest jackpots, you need to know where to find them.

We have a small list of online casinos we play at and recommend to our fellow players due to their secure gaming environment and verified status in the iGaming industry.

These each offer all or most of the aforementioned progressives and include;