Craps can be an extremely enjoyable casino game if you know what you’re doing. However, many gamblers avoid this game like the plague simply because they don’t know the rules and think the rules are too complicated to learn.

Thinking craps is difficult to understand is a common misconception among many punters. With one of the lowest house edges of all casino games, not spending the time to learn the basic rules of craps can be a costly mistake for those looking for the best value for their money.

There are only a handful of land-based casinos in Australia which host a craps gaming table, and those tables are often only open between certain hours. Online casinos don’t have opening and closing hours, so players can come and go as they please and play craps at anytime which suits them.

Additionally, online casinos are great platforms to get a feel for the basics of the game of craps, and to understand the different types of craps wagers without being yelled at by someone at the other end of the table.

Check out the following Internet gambling sites which all host at least one variant of craps. The game can be played legally by all Australians 18 years and older, for real Australian currency.

Each casino we recommend on our site is regulated by independent gaming testing agencies such as eCOGRA (eCommerce Online Gaming Regulation and Assurance), and is registered and licensed by their jurisdiction’s gaming authority.

Most important bets in craps to understand

The most important craps wager which needs to be understood before you can begin playing is the ‘Pass Line’ bet – this is the foundation for the entire game and once you know how to play this wager, you’re well on your way to becoming a seasoned professional. 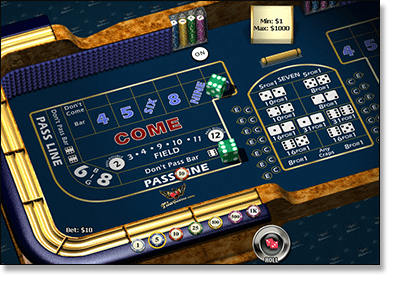 But before we detail the pass line bet, it is important to understand the layout of the craps table, too. Within a brick and mortar casino, a craps table will be hard to miss – a large oval-shaped bordered table features all available bets on its surface, with the betting layout mirrored on the left and right side (so a maximum number of players can stand around the outside and place wagers).

In the middle of the mirrored layout are the ‘prop’ bets which can be utilised by players from all around the table and include the more exotic outcomes (featuring long odds and high payouts).

Within an online casino, the layout is the same, however the table is not typically mirrored, as there is no need for two sets of the same bets. Players have the option of altering their bet sizes, utilising prop bets, checking previous rolls, and customising other settings.

These are the two most basic wagers in craps. They are easy to learn and pay out at odds of 1:1 (double your money). 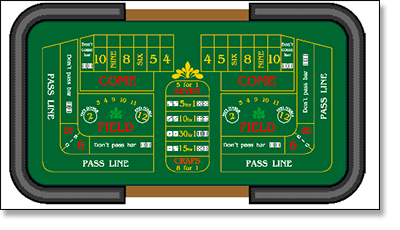 To win the pass line wager (payout of 1:1), the shooter needs to roll a total of seven or 11. If the shooter rolls a total of two, three of 12, you lose your pass line bet. If any other total is rolled, this established a ‘point’ and the next round begins, with your wager still in play.

The come and don’t come wagers can only be placed after the shooter has performed his or her ‘come-out’ roll (his/her very first roll). Once a point has been established, it can often take a while to either roll that point number again, or ‘seven out’. So instead of waiting for this to happen to place another pass or don’t pass line bet, a player can at any stage, after the ‘come-out’ roll, place a come or don’t come wager.

The come wagers can be thought of as an exclusive pass line or don’t pass line bet for the player who places it.

Taking or laying odds is a bet in craps which has absolutely no house edge, and it can be made after a ‘point’ has been established (assuming the player has already made a pass/don’t pass or come/don’t come bet). The casino does not hold any advantage on this bet, so it is advisable to either lay or take odds when you can. Here’s how to do so: 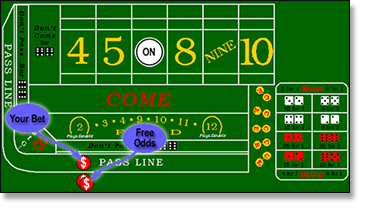 Taking odds – Taking odds (also know as free odds) in craps is betting that the established ‘point’ will be rolled before a total of seven is rolled, and is played in conjunction with a pass line or come bet. When taking odds, you will need to bet a minimum of double of what your pass line or come wager is (your initial flat bet):

Laying odds – Laying odds in craps is betting that a total of seven will be rolled before the established ‘point’ is rolled, and is played in conjunction with a don’t pass line or don’t come bet. When laying odds, you will need to bet a certain amount of units, depending on the ‘point’:

A player is required to put down more than he or she will win when laying odds because it is more common for a total of seven to be rolled before any established ‘point’ is rolled, thus sacrificing a bit more money for shorter odds.

Now that you understand these three major bet types, you can indulge in one of the most enjoyable and player-friendly games within a casino. Register an account with any of our endorsed gambling websites, securely deposit AUD cash via one of the several banking methods (credit and debit cards; e-wallets; pre-paid cards and vouchers; bank transfers), and enjoy the perks of real money online craps and online gaming.

All sites use a minimum of 128-bit SSL digital encryption technology, so player financial transactions and personal details are safeguarded.