Casino War is one of the easiest and most fun casino games available, but it doesn’t seem to be as popular in the online world or even at land-based venues as its card game counterparts. So while blackjack and baccarat tables are in abundance, it is likely you will be able to find at least one table in a land-based establishment offering the title, and fortunately we have found a few reputable Internet casinos which do offer the title so you can see just how easy the game is.

This game is ideal for anyone who isn’t ready to play blackjack — with all that strategy involved it can be quite intimidating — but wants something a little bit more thrilling than, lets say, bingo. It’s also a great first card game for beginners as it is quite easy and introduces players to basic card game concepts. The simple rules and fair payouts mean it is quite an enjoyable game once you track a table down at a brick and mortar casino. As for online, we have have you covered.

Where to play Casino War online 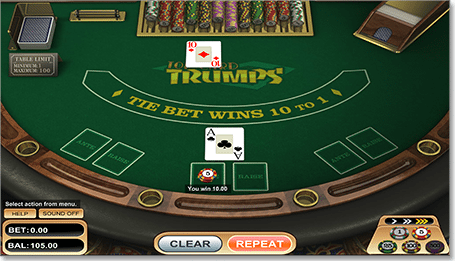 Internet casinos haven’t been as quick to pick this card game up but that doesn’t mean there isn’t reputable sites where you can play it. One of the best software developers in its field, Microgaming, have created a Casino War title, which offers the standard rules and payouts, though there is a catch. Microgaming pulled out of the Australian market in September 2017 following the introduction of the Interactive Gambling Amendment Bill, so Aussie players will now find Casino War more difficult to come by online. Luckily, one of our favourite casino sites, Mucho Vegas offers a great game of Casino Wars by software developer 1X2 Gaming.

In addition, some of our top-rated online casino, including House of Jack has a title by Betsoft called ‘Top Card Trumps’ which follows the same rules and premise as Casino War, it just has a different name and the actions are titled differently, for example Fold replaces Surrender in the title. The payouts and the layout are exactly the same. Players can access this through their browser regardless if you are on a Mac or PC.

Is it safe to play Casino War online

We have listed the aforementioned casinos because they are highly regarded as reputable online gaming sites which use secure and fair software providers. Our best advice is, that while we know this title can be a bit hard to find you shouldn’t settle for an unregulated casino just because it has the game. That is why we have found a few which are regulated and recommended by our team to ensure you are safe when playing the card game online. These casinos are recommended due to their high regard for customer safety and support.

How to play Casino War

For those of you who have never played the game the rules are quite simple. These are the standard instructions, however some variations, if you happen to find them, may have a few minor differences so read up on the instructions before you play. The game uses six decks, each totalling 52 cards with the Ace being the highest card.

For this game, the suit of the card does not matter. Each player and the dealer receives a card, and then players are required to place a bet. Other player’s cards don’t effect your card result in the game, all you have to do is beat the dealer’s card with your card — simple as that.

So if another player beats the dealer and you do too, you both win. If you win you are paid your winnings, while if your card is less in value compared to the dealer’s card you lose your bet. A tie, which can occur quite frequently, is when the game gets interesting. So if you and the dealer both reveal the same card you can either surrender and you will receive half your initial bet back, or you can go to war. Going to war means you have to double your initial wager and then you and the dealer both receive two more cards. If your card is higher than the dealer you win, but if it is lower you lose your entire bet.

Additionally, players can actually place bets on whether a tie will occur and this has a payout of 10:1, though we discuss below if it is a worthwhile bet.

Tips and tricks to Casino War

Although the rules appear quite simple there are some tips and tricks which will ultimately help gameplay. These tips can also help you avoid making sucker bets and falling for high payouts, which beginners tend to do. We also recommend sticking to a bankroll when playing Casino War since it is so easy to get carried away.

Is there any point to surrendering in Casino War?
While we mentioned the option of surrendering when it comes to a tie, doing it may not be worthwhile. Surrendering has a 3.7% house edge attached to it, while going to war sees a 2.88% house edge, meaning you’re better off, in terms of the house advantage to go to war. Besides, if you surrender and then the cards get drawn and it appears you could’ve won in the war, doubling your bet, you wont be too happy about it especially if the house edge advises against that move.

What about a tie bet?
The tie bet pays a massive 10:1 which is quite high for the even money game. But when we take a look at the house edge on this bet, we recommend avoiding it. The tie bet sees a massive 18.65% house advantage on it, meaning while the payout is good, the chances you will win is very unlikely and it ultimately is known as a suckers bet.

What is card burning in Casino War?
Variants of Casino War offer the rule variation of card burning, which many card games offer, which is another reason it is a great game to start off with. Card burning is basically getting rid of, or discarding, cards at a certain time. So for this game, the cards are burned before players go to war. It doesn’t effect the house edge, but it does remove the potential to figure out if surrendering would’ve been the better choice after going to war.

Is it better to play with fewer decks?
Following the aforementioned advice, we recommend trying to find titles which have less than six decks — though this can be difficult to do. The Microgaming title uses the full six decks and so does the Betsoft title. Regardless, if you can get the stacks lowered, potentially at a land-based venue, then the house edge is lowered from 2.89% to 2.42% which means you as a player will have a better chance of winning.

The original Casino War, the game we use to play as kids, would see our opponents cards being the thing we won. Now we can win real money instead but we will need to make a deposit before we do this. Players can easily fund their online casino account at the above Internet casinos with credit and debit card options available, as well as e-wallets, pre-paid services, and bank transfers. Once the funds are in your account click on the real play mode on the Casino War title you are intending to play and you will be able to go to war for real money.