Casino games have a long and extensive history and understanding their origin can actually help with learning the game. Additionally, some have been developed the same way their own variations have, just by altering the rules of pre-existing games. Our team have done the hard yards and compiled a concise history of a handful of popular casino games.

The history of blackjack

Blackjack doesn’t have a clear and factual origin, rather its history has been debated for quite some time. The best consensus is it is a result of several games contributing to the development of today’s standard 21 rules. 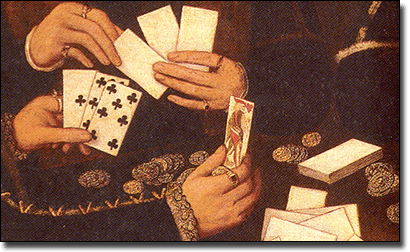 Basically, the standard game appears to be a variation of a number of different games, with the same concept, from different cultures. For example, the card game ‘Vingt-et-Un’, means 21 in French, and originated in the 1700s in France. Additionally, the Spanish has a game known as One and Thirty, which used three or more cards to reach the total of 31. Both follow the concept of the player receiving cards which they need to amount to a certain number to win.

While the above two games can be confirmed there is speculation that blackjack dates back to Ancient Roman civilisation. There are records that the Ancient Romans played a game similar to blackjack using numbered wooden blocks.

Regardless, the concept of 21 did spread throughout North America thanks to French colonists in the 1900s, but it did have varying rules. Nevertheless, we have thus attributed the French to the origin of blackjack.

It wasn’t initially received well in North America, due to the lack of engagement and poor payouts, but land-based casinos varied the rules somewhat to attract players using a 10:1 payout for players who got 21 using specifically an Ace of Spades and a black Jack, which is where the name blackjack was coined.

While the name stuck, the 10:1 payout hasn’t, but nevertheless blackjack remains one of the most popular casino games today with additional variants available such as Pontoon, Super Fun 21 and more, all built around the concept of 21.

The origin of baccarat

Baccarat has an extensive history, suggesting it is one of the oldest casino games that is still in play today.

It has been documented as existing in the 1400’s in both France and Italy, and means ‘zero’ in Italian (which explains where it got its name since all face cards and tens have a value of zero in Baccarat). The game was actually said to once be a pagan deadly ritual involving dice, but was then reinvented into a card game.

The variant Chemin De Fer (still popular today) was originally played by French royalty, before it began to spread through Europe with variants such as European Baccarat becoming more popular in certain areas, including England, due to differing rules.

This variation then spread to South America and eventually was taken to Nevada casinos featuring a combination of both the Chemin De Fer variant rules as well as the European Baccarat variant rules.

When it began to take over casinos in every country, each with their own preferred variant, only high rollers could play the game due to their high table limits. However, the Internet has allowed the game to be played by anyone who requires lower limits, thus encouraging brick and mortar casinos to follow suit. So while it is still very much a favourite by high rollers, with high limit tables available at both land-based and web casinos, players with smaller bankrolls can play too.

Additionally, a number of variants such as Mini Baccarat, Punto Banco, Baccarat en Banque, and more exist today, along with the aforementioned variants.

The history of roulette

The most consistent theory of roulette’s origin, dates back to the 17th century. A Frenchman, by the name of Blaise Pascal, was said to invent what he called a perpetual motion machine to help with his studies in probability. 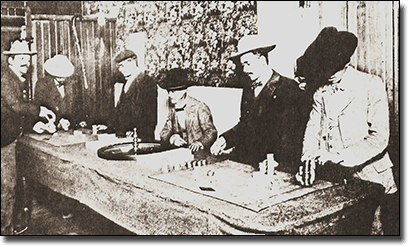 It is then said that because this machine was a failure, it was re-invented as a gambling game called Roulette, which is French for ‘little wheel’. It became incredibly popular and it has been reported that the game was seen in Paris in 1796, featuring pockets from one to 36, along with a zero numbered pocket.

Now this is where the facts go south. Legend has it that another Frenchman, by the name of Francois Blanc, danced with the devil and traded his soul to learn how to win roulette, but this story could be put down to the fact the games numbers add up to 666, which is a number said to be associated with the devil. Regardless, this legend travelled through Europe and thus so did the game, becoming quite popular in the 1800s, keeping the same format as French roulette with the single zero.

However, the game began to change as it spread to America with a double zero pocket along with the single zero pocket appearing on the wheel, as it was more favourable to the gambling establishments who would host the game. Additionally, this could be why the name American roulette has been given to the double zero pocketed game.

The origin of the slot machine

This is one casino game with an origin that can be factually traced. While they have various names in different countries including fruit machines in the UK, slot machines in the US, and pokies in Australia, their history is still the same.

In 1887 Charles Fey, a San Francisco mechanic, developed the first ever slot machine. The format was just 3-reels and the graphics were incredibly simple, featuring diamonds, spades, hearts, horseshoes as well as a Liberty Bell, to go with the title of his invention.

The gaming machine was regularly updated by Fey and as more and more machines were created the themes changed, some began to feature fruit symbols (which is where the term fruit machine comes from), as well as the inclusion of prizes such as gum began to occur. Since gambling legislation generally prevent real money prizes, the gum and other prizes meant they weren’t illegal.

While competition did exist and various theories surrounding their conception is all over the web, it can be said that it basically took until 1963 for a predominant impact in the pokies machine industry to occur. Here, Bally Technologies created Money Honey, an electronic gaming machine with coin-bets and payouts which changed the industry significantly.

These became incredibly popular and have only seen more advancements since, including microchip technology, originally by Walt Fraley but then taken over by IGT, with the slot Fortune Coin. IGT also invented the first progressive slot known as Megabucks. The popularity of these slots only encouraged more and more slot machine developers to create their own gaming machines.

As players can see today with the various video slots, 3D pokies, and progressives available both online and at land-based casinos the slots have definitely advanced since their inception and will likely continue to do so.

The history of poker

Once again, this casino game is hard to pinpoint in terms of when exactly it was created but it is said to have originated sometime during the 19th century.

However, it has been reported that the 10th century Chinese game called Domino Cards contributed to the development of poker, as did the 16th century Persian card game known as ‘As Nas’. However the game with the most similarities that dates back to the 16th and 17th centuries is known as Poque, which was a European game popular in France, Germany, and Spain. It involved players being dealt three cards and they were required to bluff if their cards weren’t of high value.

Poque was then adopted in North America by French colonists and was then adapted to the game of poker around 1834, featuring game rules similar to modern day five card poker. This variation spread all over the country, and was quire popular between soldiers during the Civil War. Additionally, Europe began to adopt the Americanised poker rules more so during World War I and from here on out the game has seen variations developed including Seven Card Stud, Texas Hold’em, Omaha, and more.

With the introduction of online poker, a spike in popularity has occurred and there are an incredible amount of poker tournaments, including the infamous World Series of Poker and the World Poker Tour, with many televised, turning the game into almost a sport.